We are honored to be partnered with the Jackie Robinson Foundation as their official auction house. This is a truly great organization doing amazing things...

Goldin Auctions provided support by hosting the Annual Jackie Robinson 70th anniversary Auction to Benefit JRF. This first auction ended on April 30, 2017, and it contained some of the best Jackie Robinson sports memorabilia to ever be auctioned! A few of these items included the 1955 Jackie Robinson World Series Game-Used Louisville Slugger that sold for $255,000 and the 1936 Jackie Robinson High School Year Book. There are already plans in motion for a huge auction and event in 2022 to commemorate the 75th anniversary of Jackie Robinson's Major League debut.

What is the Jackie Robinson Foundation? 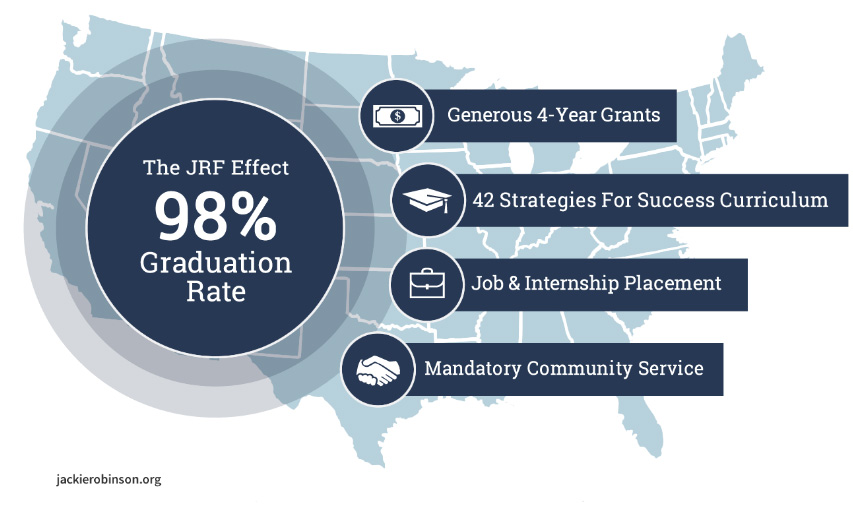 The Jackie Robinson Foundation was founded in 1973 by Rachel Robinson as a way to further the reach of Jackie Robinson's values of equal opportunity, hard work, and integrity. The Foundation's approach is in providing scholarships to minorities for college while providing additional support ranging from internships, mentoring, job placement, their own "42 Strategies for Success Curriculum", and even an international fellowship to promote service and studies abroad. All this is combined with a mandatory community service requirement and access to annual conferences to further personal and professional growth.

In the beginning, the JRF had just one scholarship recipient, but now, there are over 1,500 JRF scholars benefitting from over $70 million in grants and program services. Just as impressive, their scholars boast a huge 98% graduation rate, significantly above the national average

Goldin Auctions, which has also been the Official Auction House of the Babe Ruth Museum since 2015, will raise funds and visibility for the Jackie Robinson Foundation and the Jackie Robinson Museum project. It will host an annual Jackie Robinson Foundation Auction, featuring a wide variety of sports, historical and pop-culture memorabilia tied to Robinson, athletes of his generation, Negro Leagues baseball, the Civil Rights Movement and other related figures and topics. The first such event, the 70th anniversary auction, is slated for this spring on Saturday April 15. A 75th anniversary auction and special event is being planned for 2022.